An adult female B. insularis deposits over 250 eggs on average in her lifetime (Kerr 1966). She may lay as little as four eggs a day, but she will oviposit for many continuous weeks (Kerr 1966, Wilson 1929). The female chinch bug deposits her eggs on St. Augustinegrass close to where the plant contacts the soil (Wilson 1929). During the summer months, the eggs hatch between six to 13 days, with an average period of 11 days. This process can last a month or more during the winter months. The eggs are small and oval shaped, with a blunt end from which four small projections extend. The eggs begin as a pale white color and turn amber and eventually red before they hatch. The newly emerged nymphs resemble a smaller, wingless adult form. The first nymphal instar displays a yellow body color. The color will change to red with a pale white band across the abdomen and finally to black with a similar white band as the insect progresses through its five typical nymphal instars. 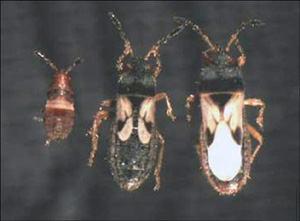 The adult form of the southern chinch bug has a black body measuring about 6 mm in length (Wilson 1929). The wings are white with a black spot on the margins of the forewings. There are two forms of B. insularis: the long-winged form, in which the wings reach almost to the end of the abdomen, and the short-winged form, in which the wings extend about half the length of the abdomen. Studies regarding the length of the adult life span differ significantly, with averages ranging from 10 to 70 days; however, the mean life span in controlled conditions seems to be around 49 days (Kerr 1966, Wilson 1929).

An infested lawn displays discolored patches, which are usually circular in shape. Injury typically occurs first in water-stressed areas along the edges of the lawn or where the grass is growing in full sunlight (Short and Black 1997; Short, Black and McCarty 1995). St. Augustinegrass cultivated on high, dry, sandy or shell soil is especially vulnerable to southern chinch bug damage (Wilson 1929). 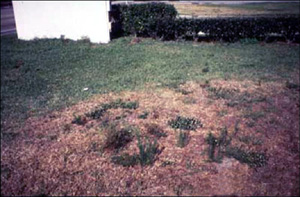 Chinch bugs are not evenly distributed in an infestation site; rather, infected plots are scattered throughout the area (Kerr 1966). Within an infected plot, B. insularis distribute vertically from the turf thatch down into the upper organic layer of soil, usually to a depth of 38 mm below the surface. When B. insularis population levels are high, the chinch bugs are seen running over the grass blades. However, their main feeding activity continues to focus on the area of the plant between the turf thatch and the organic soil level. The extent of injury of infected areas of St. Augustine grass results from the gregarious feeding habits of the southern chinch bug (Wilson 1929). Large numbers of nymphs and adults gather at the base of one plant. As they feed, they drain the sap from the grass until it withers, turning from a healthy green color to a brown-yellow color, and finally dies (Beyer 1924, Wilson 1929). Once the feeding group has killed one section of grass stolons, they move as a unit to the next adjacent stolon, continuing their destruction of the lawn. Millions of dollars spent annually in Florida to combat chinch bug outbreaks focus on the application of insecticides, the removal of weeds which grow among the infested and dead grass, and the planting of healthy grass once the chinch bug population has moved out of the area.