Have you seen termites on your property? What exactly do termites look like and how can you identify them?

When dealing with any household pest, the best tool you can have is knowledge. Living in Florida, you should be aware that thanks to our warm, damp climate, termites can swarm throughout the year. Albeit, you might not be aware of the multiple species of termites that inhabit the sunshine state. It is true that termites often get mistaken for ants. So how do you know if that bug you just saw is a termite? What do termites look like? Superior Spray Service, who was voted Best of Central Florida pest control, wants to help you identify the types of termites you may encounter on your property. Of course, detecting the correct species of termite is crucial to determining how to effectively remove them. 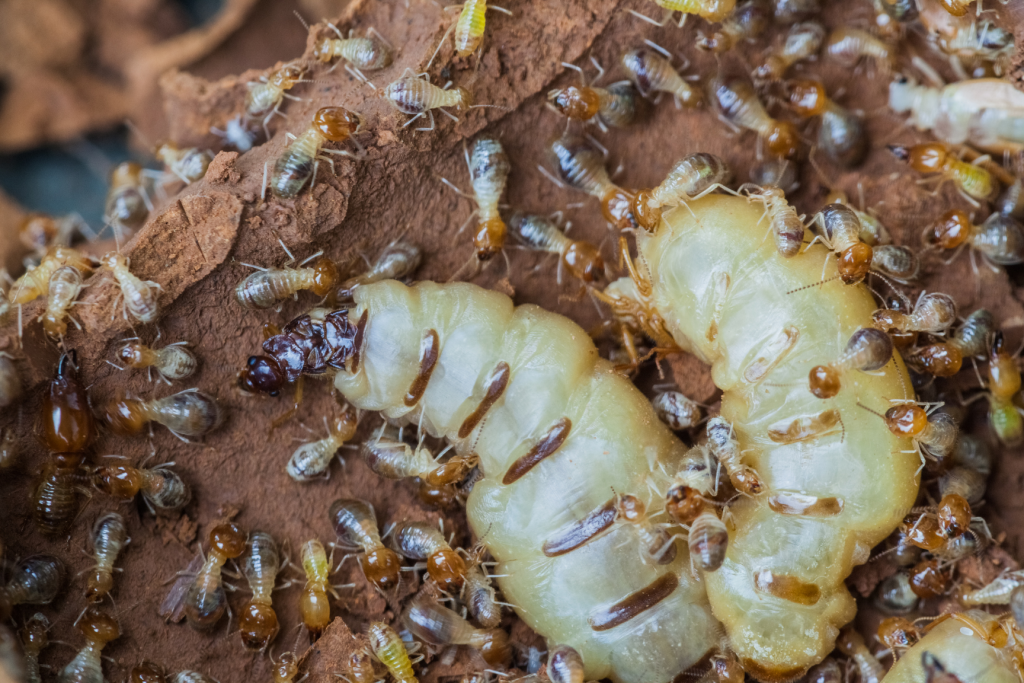 In the United States, there are more than 40 different species of termites. While all termites look like very close family, there are features in their appearance that differ. First, all termites are all similar in size, usually varying between a quarter-inch to half-inch in length. They all have straight antennae, soft malleable bodies, wide waists, and a coloration that varies from white to light brown.

Like a feudalist monarchy, termite colonies live in a caste structure. There are workers, soldiers, alates and of course a queen. These castes help determine the different physical attributes each termite will possess in order to complete their job.

Workers: Workers have to gather food and supplies for the colony’s survival. They are the smallest termites and usually the lightest in color. They often compared with insect larvae.

Soldiers: Soldiers have to protect their colony. When compared to the body of a worker termite, soldiers are similar. However, soldier termites possess a large, dark, hardened head equipped with mandibles. These mandibles are what chew through your home, business and belongings.

Alates: Alates, also known as swarmers, are winged termites that leave the nest to start new colonies. It is easy to distinguish flying termites by their double set of wings. Their four wings are equal in length, but nearly twice the size of the termite itself. The alates have the darkest color of any termite, along with a segmented body that has a straight abdomen.

Ultimately, your location is one of the most important features to consider when identifying any type of termite. In Florida, we hold the unfortunate record for the most types of invasive termite species in any U.S. state – SIX invasive termite species! Our subtropical climate and heavy tourism means Floridians also have to deal with a wider variety of termites than other states. Florida is home to nearly 60 termite species, which can be broken down into four subcategories: dampwood termites, drywood termites, subterranean termites, and conehead termites. In the case of these types of termites it is easier to identify them based on their location rather than what the termites look like. Here is a a quick reference guide:

Dampwood Termites: As the name would imply, dampwood termites like moisture—any area like a bathroom or basement that has high exposure to water.

Drywood Termites: Their choice of habitat is undamaged wood. Roofing materials, wall supports made of wood, and deadwood all can become breeding grounds.

Conehead Termites: This species of termite known for inhabiting Florida creates a home underground but travels above ground. Regularly mistaken for ants, they create distinctive mud tubes they use for travel. The creation of these small tunnels through walls grants them nearly undetectable access to buildings.

While termites look like really tiny ants, they are still visible to the human eye. However, it’s not likely that an untrained professional will be able to determine the specific termite species in a chance encounter. That is why you need the trained eye of an expert, like the certified professional technicians at Superior Spray Service. Contact us today for your free termite inspection, treatment options and prevention methods. We are proud to serve customers in Lakeland, Tampa, Orlando, and the surrounding areas of Central Florida. Call Superior Spray Service at (833) 682-0700 to learn more about our termite inspection and control services.